West Ham youth midfielder Kai Corbett has put pen to paper on a new deal in east London, according to ExWhuemployee.

The 16-year-old made seven appearances for the Hammers’ U18 side last season, registering one assist in the process, but also played a number of times for younger age groups too, hitting four goals in four matches for the U17s back in April. 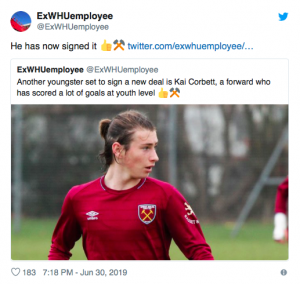 This looks like a really decent deal for West Ham. Corbett is young and a long way off the first team, but he looks as if he has the potential to be a real player, and he will no doubt be given every opportunity to prove himself in east London. There are few, if any, clubs in the top flight that can boast the same sort of record on youth that West Ham have, and it makes sense for a player like Corbett to want to stick around for as long as he can. The success stories of players like Declan Rice should be enough of an incentive for any young player to believe that they can make it in the senior side, and with a knack for goalscoring and a good creative flair to his game, Corbutt stands as good a chance as anybody. That fact that he is already playing for the U18s is a good sign, and the next step for the youngster is force his way into the Premier League 2 team.