Balotelli can replace Hernandez with ease

The way the last few weeks have panned out, it would come as a surprise should West Ham secure the signing of a striker this summer.

Manuel Pellegrini has set a forward has his top priority and his excruciating chase of Celta Vigo forward Maxi Gomez finally came to an end with disappointment last night.

That leaves the Hammers with only one recognised striker in Javier Hernandez, but with Football Insider reporting that he will most likely leave the club this summer – West Ham must act quickly to replace him.

Pellegrini has been reported by the Telegraph to have been offered the chance to sign free-agent and former Manchester City striker Mario Balotelli, who could replace Hernandez with ease should he leave the club.

The Italian international enjoyed a great season at Marseille last season, scoring eight goals in just 15 Ligue 1 games – more than Hernandez who only managed seven in his 25 appearances.

Comparing the two’s stats via WhoScored, it is easy to see how the 28-year-old would offer much more of a threat compared to Hernandez. 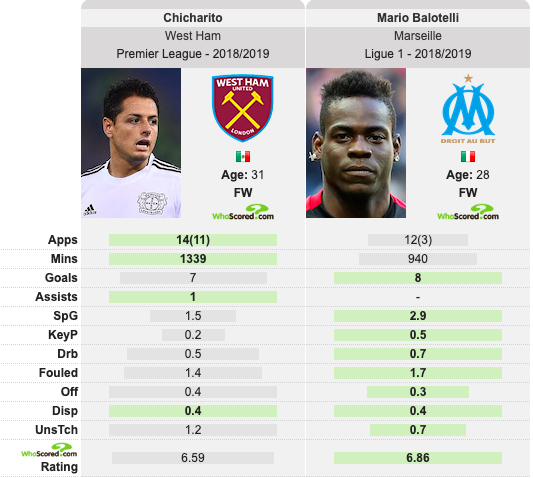 Balotelli outscored the 31-year-old in nearly every department, scoring a better match average on top of the fact that the Italian almost attempts double the amount of shots on goal-per-game.

The former Liverpool forward also looks after the ball with better care, taking fewer bad touches, as well as attempting more dribbles. His physicality could also come into favour, with Balotelli holding up the ball better which allows him to attempt more key passes – therefore creating more chances.

Reliable club source, ExWHUemployee, has revealed that Pellegrini would want to bring in two forwards this summer, and with Balotelli available on a free, he must start there.

Replacing Hernandez with the Italian would be a no-brainer, and West Ham must surely make a move for the 28-year-old in the coming weeks.