West Ham’s deal for Sebastien Haller is being held up by his agent demanding more money, according to reliable source ExWHUemployee.

The 25-year-old French striker has been heavily linked with a move to the Hammers, and is understood to have undergone a medical on Tuesday, as reported by Sky Sports, but no confirmation of a deal has yet been made.

And Ex has claimed that it is due to the intervention of the player’s representative.

Writing on his personal Twitter account, he said: “Last I heard the agent was still trying to squeeze money out of the deal.

“I would imagine it’s unlikely to be announced today even if they get our that issue but if I hear different I’ll tweet.” 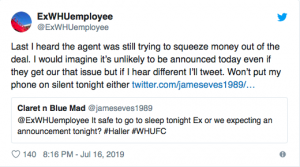 This must be so frustrating for West Ham fans. Just when it seems as if their search for a striker had finally bore some fruit, they have been held up once again, this time by the intervention of an agent. It’s hard to think of a figure in the modern game as universally derided as the agent, and in instances like this, it is easy to see why. That being said, if we’re sat here this time tomorrow and a deal has gone through, the east London faithful won’t care how it has come about, only that it has happened. Haller will be a fine signing for the Irons, and his 15 goals, coupled with an average of 6.9 aerial duels won per match last season [Whoscored], shows that he is a real handful. West Ham have been crying out for a figure like him for years now, and hopefully this snag doesn’t become a major hurdle.