West Ham midfielder Declan Rice heaped praise on 20-year-old Hammers goalkeeper Nathan Trott after it was confirmed that he was joining AFC Wimbledon on a season-long loan.

The Hammers’ official website announced on Monday that Trott would spend his 2019/20 campaign with the League One club and shared the club hoped he would be able to make his senior debut with them.

This official announcement prompted Rice to take to his personal Twitter account to hail Trott’s ability and wish him all the best for the coming season. 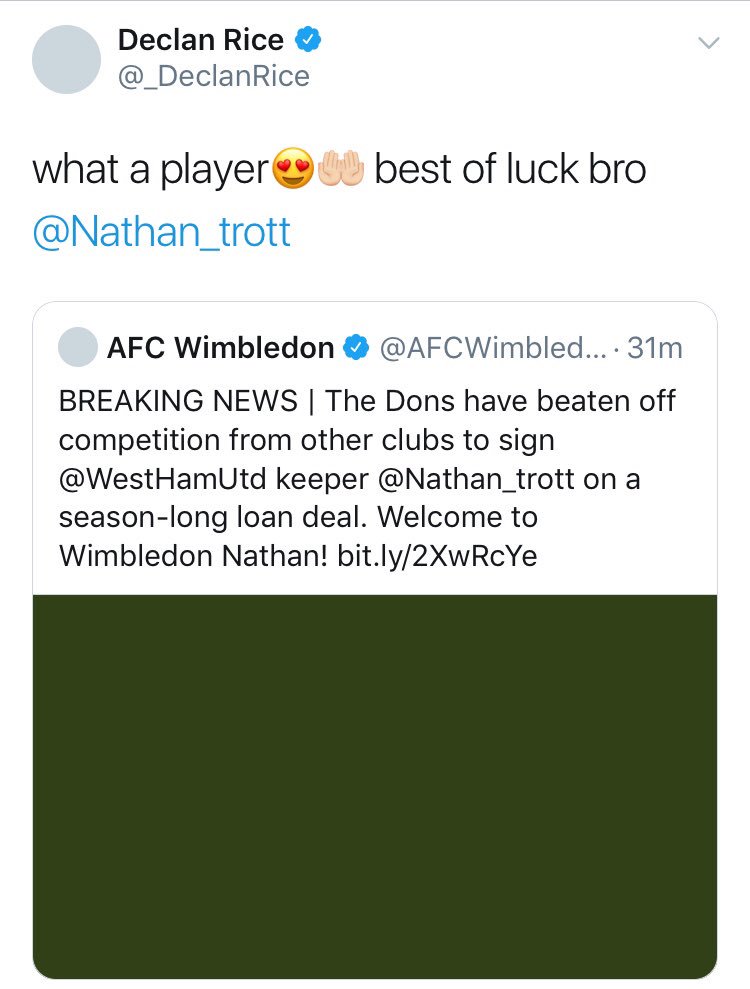 It wasn’t that long ago that Rice was in the Hammers’ youth system so he probably knows Trott very well. However, while the pair are likely friends it doesn’t take away from the fact that it’s nice to see a senior player praise a youngster. Hopefully, Trott makes the most of his upcoming loan spell at AFC Wimbledon as by all accounts he looks like having a bright future at the club. In fact, it so bright that the Hammer’s official website even noted that he was in the club’s long-term plans. Trott has never featured for the Hammers’ senior side but has regularly featured for the club’s U-23s. The 20-year-old made 13 appearances in the Premier League 2 during his 2018/19 campaign, conceding 29 goals in the process. While it would be nice for Trott to continue his development at the London Stadium, with Lukasz Fabianski in great form and David Martin as well as Spanish keeper Roberto ahead of him in the pecking order; there’s no chance he’d get a game. For example, there’s no way an unproven Trott is going to be able to dethrone Fabianski just yet as the 34-year-old racked up an impressive seven clean sheets in 38 outings in his latest campaign, and won Hammer of the Year. So by all accounts, loaning him out was the smartest move possible.