Declan Rice cheekily sent West Ham teammate Jack Wilshere a message on Instagram to claim he still wasn’t better at “finishing” in training than him.

Wilshere had previously taken to his personal Instagram account to share some clips of him in training where he scored some fantastic goals, and he added an inspirational message to go with his video.

“Remember that guy who gave up?” wrote the 27-year-old Hammers midfielder.

“Neither does anyone else!”

While Wilshere’s goalscoring montage probably had some raving, Rice took his opportunity to jokingly brag he was still the better finisher in training.

“Shame u still can’t beat me at finishing in training,” wrote the Hammers 20-year-old via his Instagram account.

Remember that guy who gave up? Neither does anyone else! ⚽️❤ 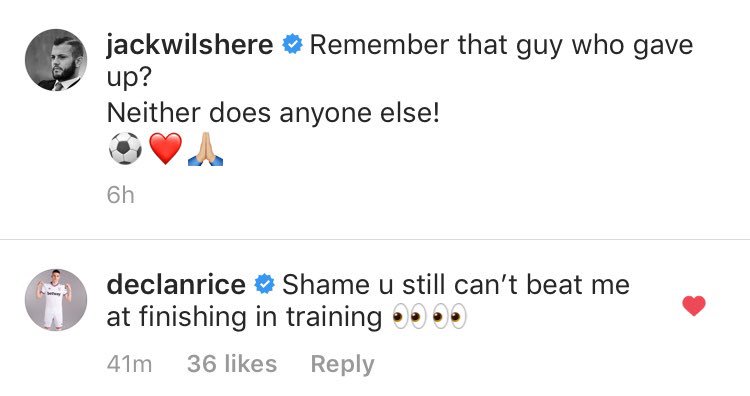 It seems there is a healthy competitive spirit brewing between Wilshere and Rice, and it wouldn’t be a surprise if they have a mini-competition about who can score the most goals in their 2019/20 campaign based on this interaction. With Rice claiming he currently has the edge over Wilshere in training when it comes to finishing, no one would really be surprised if that is the truth. After all, the 20-year-old has scored two goals in the 61 appearances he has made in the Premier League so far and that is only six less than Wilshere, who has featured way more than him in the division, by making 174 outings. Also, Rice spent 20 of his Premier League appearances playing in the Hammers’ defence rather than in midfield, and that saw him unable to have many opportunities at goal in those displays; whereas Wilshere has always been deployed as a midfielder.  It is also worth considering that Rice may be the better finisher as it stands despite being younger than Wilshere, as according to the Premier League, the 27-year-old only has 36% shot accuracy across the 140 shots he has unleashed within the division.