Adrian and Wilshere have a cheeky exchange

Adrian took a cheeky dig at West Ham midfielder Jack Wilshere as he shared he was surprised to see him score with his right foot.

The Hammers midfielder previously had taken to his Instagram to upload a clip of him in training ahead of pre-season starting next week to show he was fully fit.

“Pre season is a week away and I can’t wait! Feeling fit and ready to go,” wrote Wilshere.

The clip of Wilshere in training feature several moments of him scoring and Adrian cheekily shared he was surprised that some of the goals came as a result of the Hammers midfielder’s right foot.

However, Wilshere wasn’t going to let Adrian get away with his joke and issued a four-word response to suggest he had scored against him with his right foot previously.

“Always against you mate,” wrote the 27-year-old.

Pre season is a week away and I can't wait! Feeling fit and ready to go ⚽️ 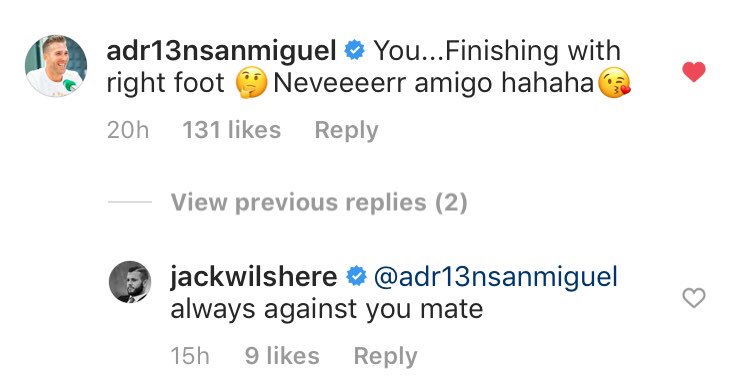 You have to love this cheeky exchange between teammates, however, it’s a shame they’re not set to be teammate much longer. The Hammers previously confirmed that Adrian would leave the London Stadium when his contract ends on June 30th. Adrian barely featured in his 2018/19 campaign due to be being behind first-choice keeper Lukasz Fabianski as he made only five appearances across all competitions. In those outings, the 32-year-old kept two clean sheets and conceded eight goals. So it makes sense for both parties that he moves on to a club that will utilise him better and that Manuel Pellegrini’s side rely on someone else to be their experienced No.2. However, after making a total of 150 appearances for the Hammers, he will always be welcomed at the London Stadium and Hammers fans will love his cheeky remarks at Wilshere’s dig. While the Hammers midfielder fired back with a cheeky pop of his own, Adrian won this exchange. After all, it’s very telling that the Hammers midfielder has only managed to score with his right foot twice in the 174 Premier League appearances he has made.