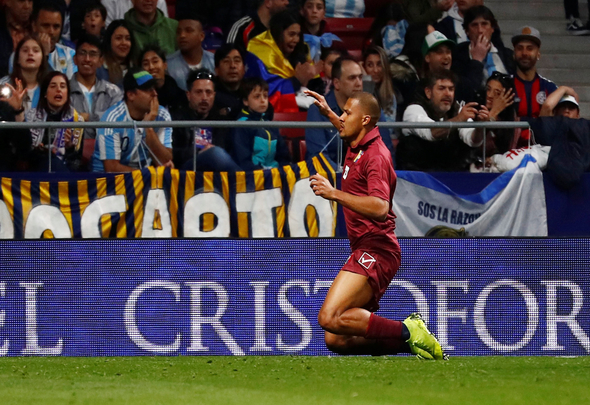 West Ham United are ready to continue their pursuit of West Bromwich Albion striker Salomon Rondon, according to Claret & Hugh.

The reliable Hammers news source confirmed that Manuel Pellegrini’s side had made a bid for the 76-cap Venezuela international, but that it was rejected by the Baggies.

However, they refuse to believe that a deal can’t be salvaged for the attacker and are prepared to go back in for him. Rondon, though, would only be arriving to play second fiddle to Marko Arnautovic in the West Ham attack.

New West Brom boss Slaven Bilic views the 29-year-old’s exit as inevitable this summer, but is clearly determined to extract value from his sale.

This is good news for the Hammers fans. There’s no point the club giving up on Rondon simply because their first bid for him was rejected. He’s still someone who would be a solid addition, it’s just that West Brom didn’t like the offer that West Ham made them for his services. However, the initial bid wasn’t that much, so you can see why it was turned down. The Daily Star reported on Tuesday that Pellegrini’s team had made a £10million bid for Rondon, as well as offering right back Sam Byram and Jordan Hugill. The fact that their bid was turned down was likely down to the presence of Hugill and Byram. However, if West Ham can offer a bit more money or some different players in part exchange, then they might be successful in their attempts to sign the burly Venezuelan. Pellegrini knows him well from their time together at Malaga, so this would be a fine signing if the club can pull it off.