West Ham not after Zouma

West Ham are not interested in signing Kurt Zouma this summer, according to reliable source ExWHUemployee.

The Hammers have been linked with a move for the Chelsea defender after a flurry of speculation on social media.

But writing on Twitter, ExWHUemployee has been unequivocal in his rejection of the rumour. 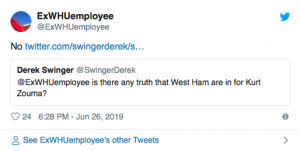 Zouma spent last year on loan at Everton, with the 6’3″ ace [Transfermarkt] wracking up 36 appearances for the Toffees.

To be fair, this one was never really in the pipeline. Any kind of transfer rumour that starts from an anonymous, unproven source on social media is usually not worth the time of day, but it’s easy for whispers like this to gain traction in a modern game where the playing field of reporting has been levelled by everybody having the means to put out any nonsense they want to at any given time. Thankfully, figures like ExWHUemployee – reliable sources with proven track records – are able to sort the wheat from the chaff, by and large. Signing Zouma would be a very difficult thing to pull off this summer, with Chelsea’s transfer ban and the need for West Ham to strengthen in other areas, and while he would have been a classy addition to the Hammers’ ranks, all things considered, it’s probably for the best that this deal isn’t going to happen.