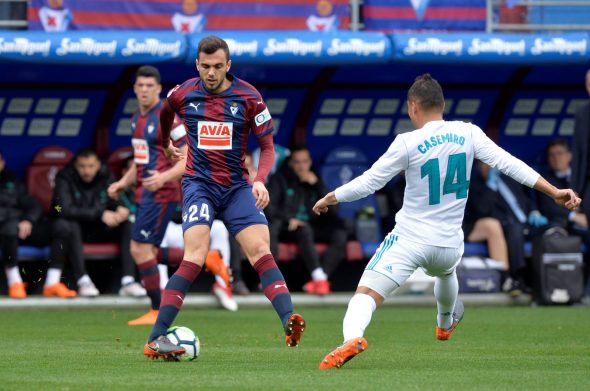 West Ham have informed Eibar that they are willing to pay the release clause of Joan Jordan, according to Marca.

The Spanish outlet claim that the Hammers have informed the La Liga side they intend to make an offer of £13.4million this summer.

Marca report that fellow Spanish side Sevilla have a strong interest in the 24-year-old, but are not willing to meet his release clause.

Despite Manuel Pellegrini’s willingness to meet the demands of Eibar, Jordan reportedly has his head set on a move to Sevilla, with this Hammers’ bid not expected to change his mind.

The 6ft midfielder [Transfermarket] was a mainstay in Eibar’s side this season, making 38 appearances, scoring four and assisting the same amount of goals.

This will be a difficult move for West Ham to complete this summer. It seems like Eibar and Jordan are in a tug-of-war like situation, with the player having made up his mind already with reports suggesting he wants a move to Sevilla. Despite that, Eibar will no doubt prefer their man moves to the Hammers, who are willing to pay the £13.4million, compared to their fellow La Liga club who don’t want to cough up that much. The advantage Sevilla have is that Jordan wants the move and could look to force his way out of the club. Should Mario Husillos lodge an offer in the coming days and it is accepted, Jordan could be tempted with a move to London should lucrative terms be offered to the midfield man. Hammers’ fans will no doubt want to see the arrival of Jordan, who would surely be a steal for the reported price, this move comes with a realisation that Sevilla is most definitely his preferred location this summer.