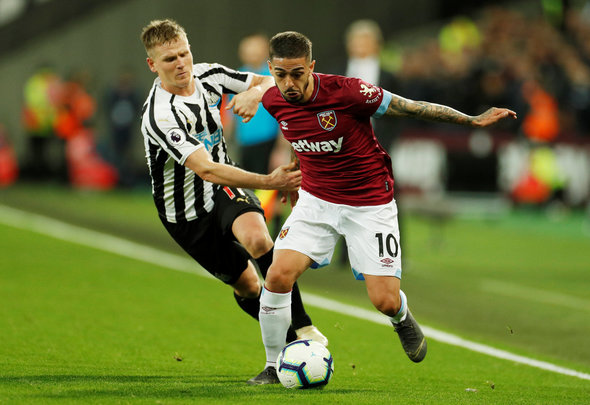 As the speculation over West Ham United’s reported pursuit of Villarreal playmaker Pablo Fornals continues to gather pace, the club’s supporters have begun to fear for the future of Hammers star Manuel Lanzini.

Would the Spanish international’s arrive force the Argentine to seek the London Stadium exit door? Does it mean that the club have abandoned their contract talks with the midfielder?

Apparently not. Reliable Hammers news source Claret & Hugh reported on Wednesday that talks with Lanzini over extending his current deal are continuing at the moment and that the club have no intention of selling him.

They are hoping to tie the 26-year-old down to a new three or four year contract, while he wanta his personal terms doubled. A West Ham source also confirmed to Claret & Hugh that Fornals would not be a replacement for Lanzini.

Now that is a big relief. The Argentine has been one of the team’s best players for a few years now, and it was a huge blow to the Hammers to be without him for much of this season.

He did return towards the end of the campaign and understandably struggled to rediscover his best form at first, but by the end of the season he was beginning to look like his old self again.

With that said, it would be absolutely criminal to allow him to leave, either because of a contract dispute or because of the potential arrival of Fornals.

You’d surely want to keep your best players and pair them together, wouldn’t you? An attacking midfield trio of Fornals, Lanzini and Felipe Anderson? Sounds good to me.

With that said, the club’s stance on Lanzini is a big plus for the supporters. They will have feared the worst earlier this week, but everything seems to be proceeding along the right track now.