When Issa Diop arrived at West Ham last year, he became the club’s record signing. The 22-year-old Frenchman joined the Hammers in a deal worth up to £22million. Diop quickly became a mainstay at the London Stadium, with Manuel Pellegrini seeming to favour his physicality over the likes of Angelo Ogbonna. Diop made 33 Premier League appearances for West Ham and scored his first goal for the club in a 3-1 victory in the League Cup against AFC Wimbledon in August. The French youth international’s performances have not gone under-the-radar this season, with Manchester United reportedly plotting a £45million plus player swap for the young enforcer. Sky Sports journalist Kaveh Solhekol revealed the news on his personal Twitter account by saying: “Manchester United are interested in signing Issa Diop and they are willing to pay £45m plus a player for the West Ham defender. West Ham have let it be known that Diop is not for sale.” Many West Ham fans reacted the same way to the breaking news, mainly laughing it off, claiming their marquee defender is worth much more than the reported amount ready to be offered by the Red Devils. One fan said: “Considering they were willing to pay £90mil for Maguire, I’d only accept if the player they’re offering is Martial.”

Forever West Ham picked out some of the best responses below: 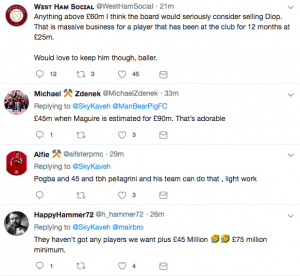 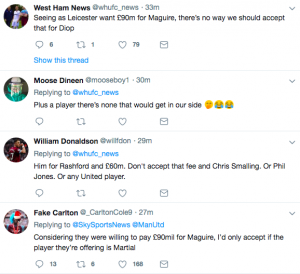 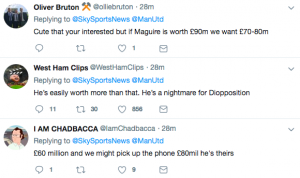