West Ham are awaiting a decision from academy forward Jamal Hector-Ingram, according to ExWHUemployee.

The 20-year-old is understood to have an offer on the table from the Hammers, but is also being courted by a number of other clubs, including League Two outfit Crawley Town.

Hector-Ingram hit one goal in 17 appearances for the U23s last season, but previously struck 12 times in 23 matches for the U18s. 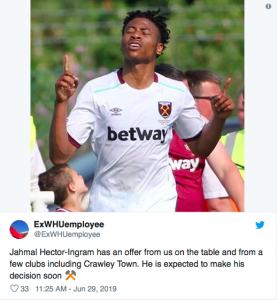 West Ham have been doing wonderful things with their youth academy in recent times, and the rapid ascension of players like Declan Rice and Grady Diangana show that the Hammers are truly a meritocracy. Because of that, Hector-Ingram faces a big decision. On the one hand, if he stays and plays well, he could easily earn himself a first team nod in the relatively near future. On the other, going out to a club like Crawley Town would guarantee him a lot more game time and the opportunity to develop his age at a senior level. 20 years old is by no means ancient, but if he is to make it for the Hammers you would fancy that it will have to happen sooner rather than later. One goal in 17 appearances last season doesn’t bode too well for his chances, but the offer of a new contract and 12 in 23 for the U18s would suggest that there’s something there. Whatever he decides, you just hope that it’s the correct choice for his career.