Obiang and Sanchez in trouble

West Ham have made a really positive start to the transfer window.

Following a brace of veteran goalkeeper signings in the form of David Martin and Roberto, the Hammers finally got down to serious business with a move for midfielder Pablo Fornals.

Fornals has already got pulses racing in east London with a couple of goalscoring turns at the U21 European Championships in the past week, but as with any transfer, there are bound to be winners and losers.

Bringing in the 23-year-old now means that Manuel Pellegrini is blessed with a gluttony of midfield options, and ultimately, somebody somewhere along the line is going to be given the boot.

And according to Football.London journalist Sam Inkersole, Pedro Obiang and Carlos Sanchez should be worried.

Writing in a piece for the outlet, he said: “Pellegrini needs to trim maybe two of his playing staff from there [midfield] and those in contention to make way are Pedro Obiang, Carlos Sanchez and Josh Cullen.

“The latter is expected to get a run out in pre-season to impress the manager in what could be his final chance to stake a claim at the club.”

Cullen has shown lots of promise during a loan spell with Charlton Athletic this season, and you would expect him to do just about enough to convince the Chilean that he is worthy of a senior squad place this year.

As for Sanchez and Obiang, however, you have to worry for them.

In both attacking and defensive areas, both players hardly shone last year.

Admittedly, Sanchez made just two starts and five substitute appearances because of injury, but his averages of 0.1 interceptions and 0.3 key passes are pretty dire for a central midfielder [Whoscored].

As for Obiang, 0.6 clearances and 0.3 dribbles just aren’t enough for a player who should, by rights, be dominating the game between the two boxes [Whoscored]. 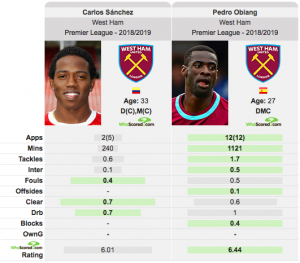 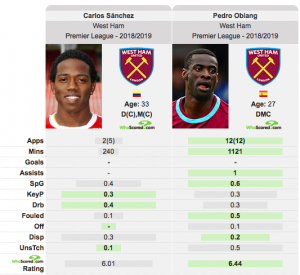 At 33 and 27 respectively, Sanchez and Obiang are hardly spring chickens, and unless Pellegrini has some kind of monumental U-turn, or Cullen capitulates during preseason, it is easy to see one, or both, being shown the exit door this summer.