Noble will be praying McGinn hunt falls on its face 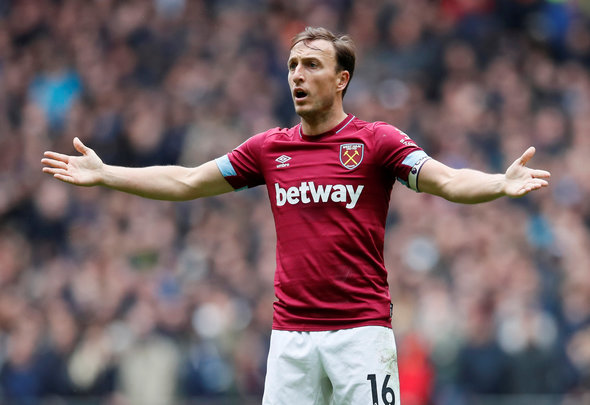 It would be fair to say that in Mark Noble and Declan Rice West Ham have one of their most popular midfield pairings in recent history.

The duo are adored by the Irons faithful for similar reasons – namely the fact that they are homegrown talents who have come through to perform at the very highest level for the club.

Noble is Mr West Ham, having been a hugely dedicated servant to the east London faithful, while Rice is the next big thing to wear the famous claret and blue shirt.

However, even after forming a formidable partnership in the middle, it seems as though Manuel Pellegrini is not settled with his midfield, speculation suggesting he is keen on bringing in a new signing to bolster his first team options.

The Daily Mail report that the Hammers have been in pursuit of Aston Villa’s John McGinn after his dazzling performances on the way to play-off glory and promotion and as a forward thinking midfielder, it would be Noble rather than Rice who found himself in the firing line.

The report does state that the Villans are looking to tie the 24-year-old Scottish international to a new deal and Noble will no doubt be praying that happens and the Hammers’ move is put on ice – for his starting role would be under serious threat.

Looking at the trio’s defensive contributions via Whoscored, it comes as no surprise that Rice, the centre back turned midfielder, leads the way but what may be surprising is how McGinn sits pretty in second.

On average the Villa man produced more tackles, interceptions, clearances and blocks than Noble – not to mention he finds himself dribbled past less than Rice and the same as Noble. 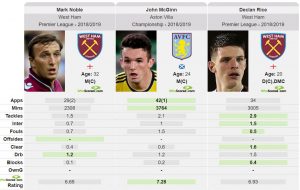 If Rice is the enforcer of the trio, then McGinn is very much the attacking option, with more goals, assists, shots, key passes, dribbles and fouls earned – although his desire to push forward does see him dispossessed more often too. 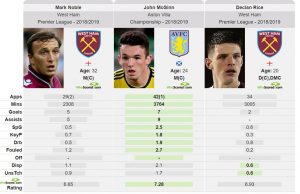 So where does that leave Noble? Well, the stats put him down as someone who moves the ball across the pitch, with over 10 more passes on average than McGinn – but Rice is not far behind his teammate.

With less long balls forward and more key passes, McGinn’s efforts are looking more at penetrating the back line of the opposition than Noble’s and with Rice alongside him as a defensive foil, there is little doubting the Scottish ace would bring more to the fore than the Irons veteran. 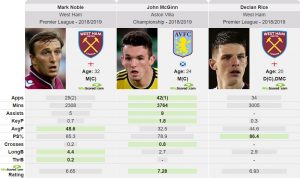 It looks like Villa might be able to get McGinn to commit to that new deal and Noble should be greatly relieved – the Scottish ace was set to offer a lot more than him from the middle of the park.