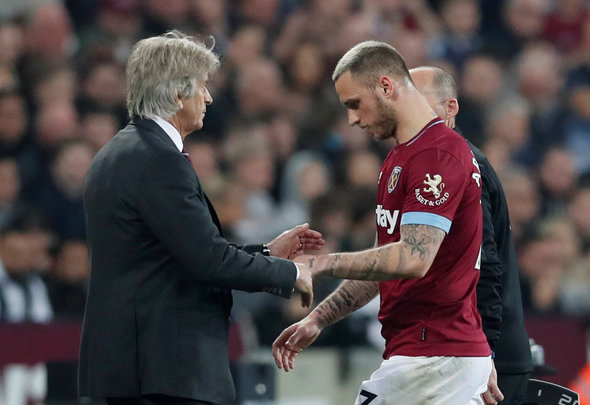 With a starting XI full of quality and talent, it is difficult to pinpoint exactly where West Ham manager Manuel Pellegrini needs to strengthen ahead of the summer transfer window.

The Irons have arguably one of the best sides outside the top six of the Premier League, when everyone is fully fit, with a mix of experience, youth, desire and determination – not to mention undeniable footballing ability.

Perhaps the biggest issue is a lack of squad depth, with those waiting in the wings behind the starting XI lacking in terms of the talents of their teammates.

That is most certainly the case when it comes to Pellegrini’s options up front, with Marko Arnautovic lacking any real competition in leading the line.

With Lucas Perez and Andy Carroll out the club, the manager’s options are even more limited now than they were towards the end of the season, leaving him a headache as to who to call upon for backup – or even a replacement if the Austrian leaves east London.

The 30-year-old scored nearly a fifth of all the Hammers’ Premier League goals – Felipe Anderson and Javier Hernandez his closest rivals – and so a new addition would be a welcome sight.

Step forward Manchester United’s Anthony Martial – a player who once would have been viewed as out of the Hammers’ reach.

However, the Independent claim that the Irons have demanded the French hitman’s signing in a swap deal for Issa Diop and while the Old Trafford side are said to be reluctant, the east Londoners must stick to their guns.

Martial is the sort of signing that gets fans out of their seats and brings the best out of his teammates while showing his brilliant individual skill too – and his capture would make Diop’s exit an easier pill to swallow.

The forward’s versatility means that he could operate anywhere across the front three – perfect for Pellegrini next season – and his arrival would help end the manager’s headache over who to call upon up top.

Possessing great pace, excellent close control and the ability to make something happen out of nothing, he is the spark that the Hammers need to bring their attack into life.

Diop is a prize possession the Irons must not give up easily and if Martial is their top choice, they must not accept second best from Manchester United.