Marega is a ‘top target’

FC Porto striker Moussa Marega is a “top target” for West Ham this summer, according to reliable source ExWHUemployee.

It is understood that the Hammers are still keen on the 28-year-old, after being linked with a move for him by Portuguese outlet Record last month.

But while the Irons retain an interest in signing the forward, who hit 21 goals and assisted 11 more last term, it is also believed that a deal is nowhere near completion.

Writing on his personal Twitter account, ExWHUemployee said: “He [Marega] is a top target yes, but a deal is no way at this stage.

“Other targets ahead of him”. 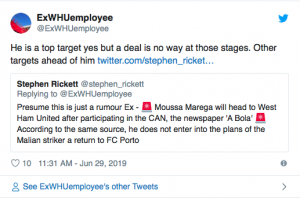 What a signing this would be for the Hammers. Marega is a goal machine, and his robust style of centre forward play would go down a treat in east London. The Malian won 1.9 aerial duels per match last term, as well registering 3.2 shots per game [Whoscored]. The stats also show that he only managed one key pass per outing, but the fact that he notched up 11 assists illustrates just how incisive he can be, to the benefit of those around him. It sounds like a deal is still some way off, if it’s going to happen at all, but certainly, if there is even a slim chance that the Hammers can pull this one off then they should go all out to land their man. Marega is exactly the kind of statement signing that the Irons should be looking at if they are serious about bridging the gap between themselves and the fabled top six.