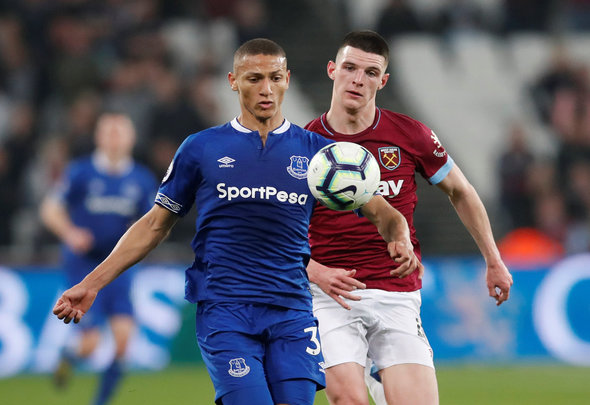 Manchester United have reignited their hunt for West Ham midfielder Declan Rice as they look to poach the England international for £50million, according to the Sun.

The newspaper claim on their website that the Old Trafford outfit have returned to east London in their hunt for a midfield enforcer and have been in touch with the Hammers once again after being dealt a hands-off warning on the first time of asking last season.

It is stated the Irons want £80million for the central star but that Manchester United would be looking to spend £50million on his capture.

Rice has the potential to become a West Ham legend if he stays at the London Stadium but there is no reason his talents could not see him write himself into the history books elsewhere if he does move. As a young, English defensive midfielder he is a rare breed and it is no surprise that a team like Manchester United are so keen on taking him for themselves. There is a £30million gulf between the two clubs’ valuations on the youngster and at the moment you would imagine West Ham are the ones in the driving seat. If Ole Gunnar Solskjaer’s side upped their offer to £60million then maybe the Irons might find themselves tempted and a £70million offer would no doubt have a couple of heads turned in the London Stadium boardroom. This could be the summer which defines Rice’s future and he needs to decide where he wants to be next season. Does he stick around for another year with West Ham and play regularly for a side with marginal pressure compared to what would be expected at Old Trafford, or does he head north and try to be a driving force in Manchester United’s planned resurgence?