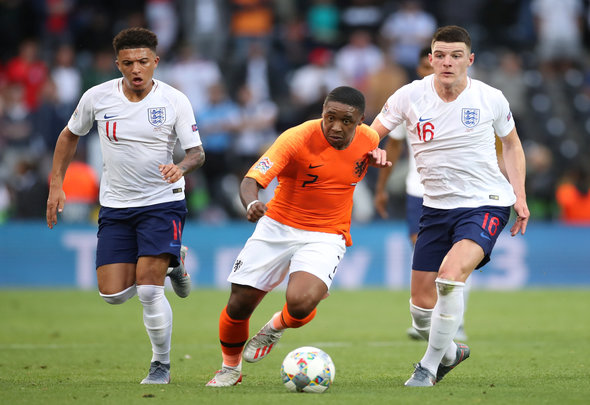 The 20-year-old shunned the Republic of Ireland, despite making three appearances for them, in favour of the Three Lions earlier this season.

Former Ireland international Kilbane clearly isn’t over the youngster’s decision: “Nice to see Declan Rice belting out the national anthem before the game,” he said on Virgin Media‘s commentary during the game.

“He must have had to learn that quick sharp,” he finished.

Nice of Kevin Kilbane to acknowledge what a big night it is for Declan Rice #overit #NEDENG pic.twitter.com/LNCGFdhw2F

It was rather humorous to see Rice, who has obviously worn the green shirt of Ireland in the past, thundering out the English national anthem – louder than any of his teammates – before his team’s Nations League clash with the Netherlands. He’s clearly a proud Englishman, he was born on these shores after all. But presumably he has always been a proud Englishman, even when he was representing the emerald isle. So it’s no surprise to see a former Ireland international like Kilbane take exception to Rice’s vociferous singing of the national anthem. It was a subtle little dig from Kilbane, but he knew exactly what he was doing. He’s clearly still a bit bitter about the whole situation, which only speaks to what a good player Rice is. If the West Ham star wasn’t someone the Irish were worried about we wouldn’t be hearing all this. So it’s a compliment in a way, even if the Hammers ace would rather have the whole ordeal behind him by now.