Gomez would be perfect for West Ham

Too many inconsistencies hindered West Ham last season as they eventually finished their Premier League campaign by breaking into the top-half.

The need for consistent goals from a striker continues to be a worry for Manuel Pellegrini, with Marko Arnautovic being the Hammers’ top scorer with only 11 goals.

Pellegrini is in the market for a striker with reports suggesting Celta Vigo forward Maxi Gomez has become his top target. The 22-year-old is currently away on international duty with Uruguay and the Daily Star report that it will take an offer close to Gomez’ £43.5million release clause to tempt the La Liga club to sell in the summer.

Gomez has been compared to his international teammate Luis Suarez throughout his career, and West Ham must make sure they win the race for his signature.

Looking at the striker’s contributions last season compared to Arnautovic via WhoScored, Gomez was more effective in the final third for his club and would bring a different dimension to the London Stadium.

The young striker scored more goals and delivered more assists to his teammates in the previous campaign – highlighting both his hard work-rate and natural attacking ability. 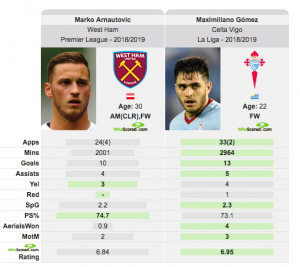 Involved in four more goals last season, it comes as no surprise that Gomez attempts more shots on goal than the Austrian international, who failed to make much of an impact for his side in the second half of the season.

The big difference between the two is their desire to win their personal battles. It is highlighted in the fact that Gomez won four aerial duels per game on average compared to Arnautovic who could only average 0.9.

A move for Gomez could see Arnautovic adapt to a deeper role, with the 30-year-old better on the ball than the Uruguayan. Looking at the comparison of the two forwards, Arnautovic takes better care of the ball with the striker being dispossessed less than Gomez. The former Stoke man also attempts more dribbles per game and takes better control in possession on average.

These stats could lead to a partnership between the two, with the more direct Gomez leading the line and the Austrian playing a new role to bring the best out the pair.