Jack Collison has sent a message to Jack Wilshere, claiming the West Ham midfielder will return to his best next season.

Collison was responding to a tweet on the West Ham account, where the 27-year-old revealed his ambitions to play for as long as possible to support his family.

The former Hammers man believes that the England international, who was rarely seen in his first campaign at the club due to injury, will have a great effect on Manuel Pellegrini’s side in the upcoming Premier League season.

Collison wrote on his personal Twitter account: “I really think we will see the best of this man next season… and what a player he is.” 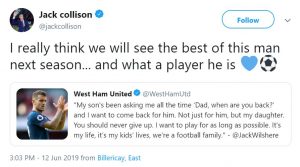 Wilshere only managed to make eight senior appearances in the Premier League season, after suffering a countless number of injuries throughout the campaign.

There is no doubting that Jack Wilshere holds the quality to succeed at the London Stadium. The only thing that casts doubt over this, is whether or not he can stay fit after a career plagued with injuries. The 27-year-old has failed to make any impact under Manuel Pellegrini, and this season must be a make-or-break moment in his Hammers’ career. The £100,000-per-week star [Source: Spotrac] will need to prove he is worth such big money at the club, with players in similar positions enjoying great seasons in the past year. Felipe Anderson and Declan Rice have both been phenomenal in midfield and with the new potential signing of Pablo Fornals could see his position come under scrutiny. The decision to give Wilshere another chance next season will give him great motivation, and his recent comments only prove that there is added fuel to the fire to push on next season, which can only be a positive for all involved at the London Stadium.