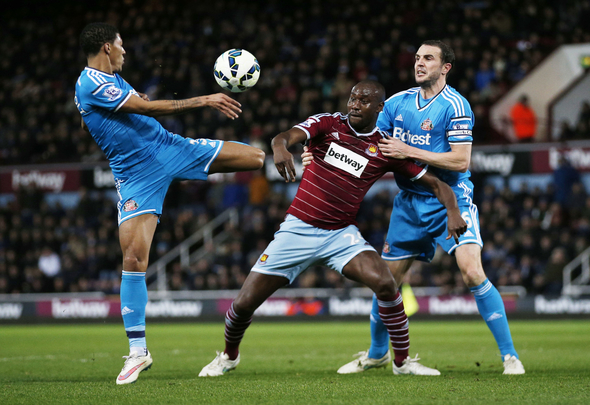 Former West Ham striker Carlton Cole has revealed what he told Manchester City winger Raheem Sterling after bumping into him at the London Stadium on Friday.

The Baseball had taken over East London, with the New York Yankees ready to face the Boston Red Sox in the Major League Baseball London Series, with the Hammers’ ground transforming in the previous week.

West Ham will welcome Pep Guardiola’s side into town on the opening weekend of the Premier League season, and Cole didn’t waste any time in making a joke with the England international.

The former Hammer wrote on his verified Instagram account: “great to bump into @sterling7 who is a baseball fan too, I told him he’s not going to win against the mighty @westham next season, well at least not here at our stadium.” 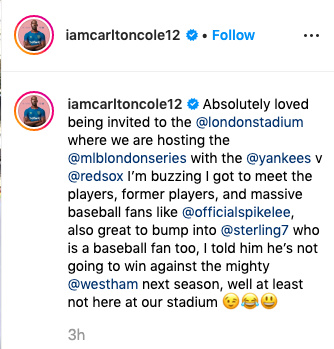 Cole wasted no time in making a joke with Sterling, with all Hammers fans hoping that come the opening weekend, their side will be walking away with the three points. It will be no easy task at all for West Ham, who have now faced a top-six side on the opening day in their previous six seasons. Manuel Pellegrini’s side have only won two out of their previous 17 meetings with City, with Guardiola’s men having kept a clean sheet in 53% of those matches. [Footystats] Last season, City also won both games between the pair, with the game at the London Stadium finishing an emphatic 4-0 in favour of the champions. Sterling was the man at the end of the joke with Cole, and he is the player that West Ham must pay attention too. It is imperative they slow down the winger, who was involved in an impressive 44 goals in 61 games last season. [WhoScored]