Former West Ham defender Jose Fonte has sent a message to Declan Rice after the midfielder was named in the EA Sports’ Premier League Team of the Season.

West Ham confirmed that the 20-year-old had been named in the side on Friday and that there is now an upgraded version of his FIFA Ultimate Team card, from their verified Instagram account.

Rice responded to the post by referencing his pace upgrade in the game in a somewhat cheeky reply to the accolade.

“Oiii that’s a better upgrade from the 69 at the start,” said the midfielder from his personal Instagram account.

It seems that the England international wasn’t the only one to appreciate the upgraded card, in fact former Hammer Fonte had something to say on the matter.

Declan Rice is in the @easportsfifa Premier League Team of the Season! 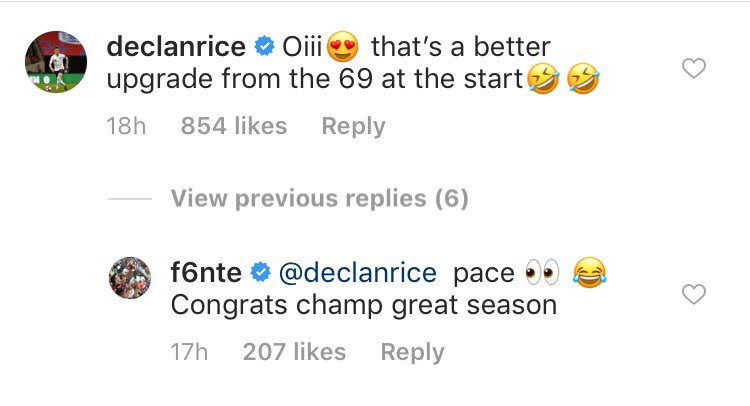 It’s always nice for fans when a player is still blatantly showing interest in their former club, especially when that player seems to be showing respect for the younger players coming through at the club. Rice has had an incredible season this year, and that seems to have been recognised by pretty much everyone, including players who are no longer playing in a claret and blue shirt. Fonte has been playing his football for Lille this season in the French Ligue 1, and has been on form for the French side, featuring 36 times throughout the campaign. Although things didn’t quite work out the way he may have wanted at the London Stadium, he has shown his ability in the French league this season, and has also shown that he still has time for the Hammers, and follows them regularly. Rice may have to get used to these sorts of accolades being given to him, as there will no doubt be more to come in the next few seasons.