West Ham United loan star Josh Cullen played the full 90 minutes as Patrick Bauer’s last gasp goal gave Charlton Athletic a 2-1 victory over Sunderland in the League One Play Off final on Sunday, sending the Addicks back up to the Championship. It was Cullen who played a key role in the crucial second goal, producing the cross that was eventually turned home by Bauer. The 23-year-old has enjoyed an excellent season at The Valley, but there are clearly plenty of Hammers fans who are rather less than convinced on his prospects in east London. They don’t seem confident that he’s good enough to be a Premier League player, with many of them asserting that the second tier is more his level. It’s hard to disagree, in all honesty. It’s difficult to see him ever being a regular for a team like West Ham in the top flight. He’s a talented midfielder, but the step up from League One football, like we saw on Sunday, to the Premier League would likely be too much for him.

And as much as I am pleased for Josh Cullen he is not going to be a PL player. He'll have a very good career at a club like Charlton. I would rather see him play week in week out then us hanging onto him for a couple of run outs in cup games.

Still not convinced on Cullen myself tbh.

He's not doing nothing wrong but for Premier league I'm just not really convinced he offers enough.

Don't think he improves our squad.

Not sure what his best role is either as a midfielder.

100% agree – our fans get a bit carried away with homegrown and young players.. he isn’t good enough for a team wanting top half of prem 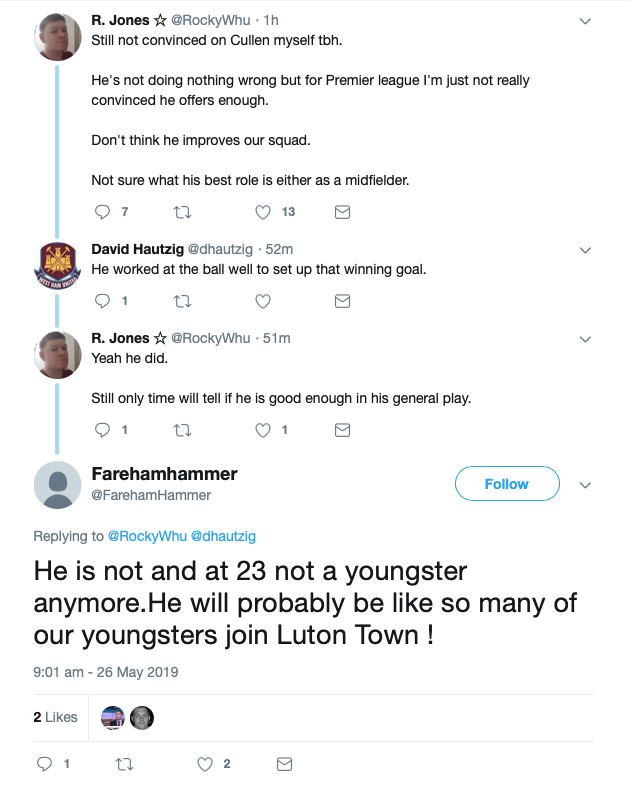 Not sure he’s more than championship standard