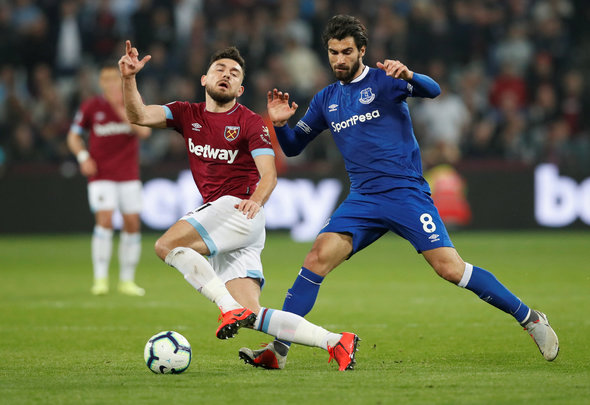 West Ham could be set to increase their offer for Barcelona midfielder Andre Gomes, after making an initial bid for the Portugal international already this summer, according to Claret and Hugh.

The reliable website for West Ham news report that Gomes is a player Manuel Pellegrini is keen to bring to the London Stadium during the summer transfer window, and the Hammers could be prepared to go as high as £25million to secure the 25-year-old’s signature.

West Ham are believed to have already made an offer of around £18million to Barcelona for the Portuguese midfielder, who spent the season on loan at Everton from the Spanish champions with the Toffees keen on making the move permanent, according to The Times.

Barcelona are thought to be looking to receive a fee of around £30million, but a bid of £25million might be enough to secure a deal for the central midfielder this summer.

It will be interesting to see whether West Ham do step up their bid to sign Gomes from Barcelona this summer, with Pellegrini thought to be an admirer of the Portugal international. Gomes had a solid debut season in the Premier League for Everton this term during a loan spell from Barcelona, and the midfielder offers a calming presence in possession in the middle of the park. That is likely to be the main reason Pellegrini is interested in brining him to the London Stadium, as the Chilean attempts to stamp his passing style onto the club. West Ham have been short at times in midfield this season, with both Manuel Lanzini and Jack Wilshere suffering spells out through injury. That makes it ever more important that Pellegrini ensures he has enough midfield options to call upon next term, and having already had a year to adapt to the Premier League Gomes could be a very useful option for the Hammers.