Former West Ham midfielder Matt Taylor has backed his old club to make it in to Europe once again under Manuel Pellegrini.

The Hammers will finish this season in the top ten should they beat Watford on the final day on Saturday after a positive end to the season.

Speaking on Jim White’s talkSPORT show on Tuesday (07/05), Taylor spoke on West Ham’s quest of Europe in years to come: “I think it’s doable. They’ve got the right man in charge, I like the signings that they make.

“They’ve got a manager that can attract the right type of players, they’ve got the investment from the board. I hope sitting here as an ex West Ham player that they go on and achieve something in the next five to 10 years that all West Ham fans can be really proud of.” 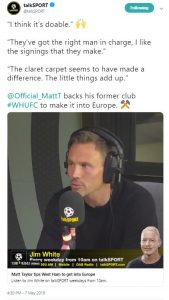 West Ham spent £94.82million this season and that looks set to continue into the next campaign with reputable club source ClaretandHugh reporting that Manuel Pellegrini is working hard to bring in six new faces in the summer.

Matt Taylor is right to say that his former club should and could make it into Europe again. With a big summer push in the transfer window there is no reason why the Hammers can’t make it into seventh spot or even higher in the Premier League. In terms of spending power, Pellegrini will go past the £100million mark in the summer if the reports surrounding six new faces arriving are true and Europe should be a minimum target for a club with such spending power. Although this season has ended positively, there is no doubt that the fans will be disappointed with their clubs effort in the Premier League and next season will be a chance to get rid of all potential negativity at the club. Taylor spoke about the draw of Pellegrini and that has been highlighted this year, especially with the signing of Felipe Anderson who has been a revelation, if they can replicate this calibre of signing then the Chilean’s squad will certainly be favourites to push for Europe and that should be a minimum.