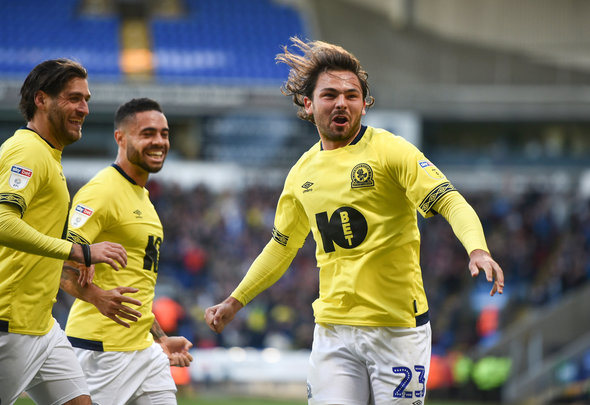 West Ham manager Manuel Pellegrini might have been handed a boost in his pursuit for Blackburn Rovers midfielder Bradley Dack, following comments from the club’s manager Tony Mowbray.

Pellegrini’s side are thought to be interested in signing Dack during the summer transfer window, but could potentially be put off by Blackburn’s reported valuation of £18million for the midfielder according to the Daily Mail.

However, Blackburn manager Tony Mowbray has now suggested that the club could be willing to sell Dack this summer, so that they can invest in more players to improve the Championship side’s squad.

“Somewhere down the line we might sell Bradley Dack and get better because we invest the money better and the team gets stronger,” Mowbray said as quoted by Sky Sports in the broadcaster’s Transfer Centre on Friday [7:04am].

“When we’ve discussed with the owners we’ve talked about a model where we can buy talented young players, you can sell big and buy small.”

That could offer a potential boost for the Hammers, as Pellegrini looks to strengthen his options in midfield after securing a tenth place Premier League finish in his first season in charge at the London Stadium.

Pellegrini has seen his midfield options lacking in creativity at times this season, with both Jack Wilshere and Manuel Lanzini suffering injury-hit campaigns, and a move for Dack could help to provide a player with more of a creative and goalscoring mindset from the middle of the pitch next term.

Dack has had an impressive season in the Championship, after being influential in Blackburn’s promotion from League 1 the previous campaign, with the 25-year-old has registered 15 goals and seven assists for Mowbray’s side.

The midfielder has a knack for arriving late into the penalty area and causing problems for the opposition, with Dack averaging 2.8 shots per game, 1.5 of which came from inside the area [whoscored.com] this season.

Dack’s quality in possession is also impressive, with the 25-year-old making 1.2 key passes per game and averaging a 78.4% passing accuracy [whoscored.com] for Blackburn in the Championship this campaign.

Therefore, the midfielder could be a very useful addition to Pellegrini’s West Ham squad, and the Hammers’ boss will probably have been further encouraged to make a move for Dack this summer following Mowbray’s comments.