West Ham finished their Premier League season with a 4-1 destruction of fellow London club Watford, ensuring a top half finish in the process. A key figure at the club, Captain Mark Noble, was in inspired form in the final game, scoring twice in a route for the away side. With the summer break to come, clubs will now be planning to start their transfer business in a bid to get ahead of the queue and West Ham have reportedly prepared to let go of some of the excess players in the squad to make more funds available. One member of the squad who is irreplaceable is Noble, at 32-years-old, he is indispensable and offers a huge amount on and off the pitch. The club themselves know that as a fact and posted an appreciation post for their skipper on the club’s official Twitter account early on Monday morning. The West Ham fan’s reacted with great joy for their skipper with one even saying: “Becoming my favourite Hammer ever!”.

Forever West Ham picked out some of the best tweets below: 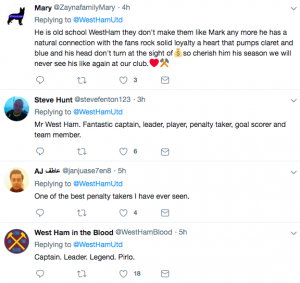 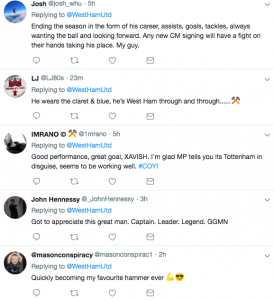