Felipe Anderson has taken to social media to thank the West Ham fans after completing his first season at the London Stadium.

The Brazilian flyer branded his first year in a claret and blue shirt as ‘wonderful’ and went on to hail the Hammers faithful after their final day victory in the Premier League.

West Ham finished their season with a successful 4-1 away thrashing at Watford, and although Anderson didn’t manage to get on the score sheet, he has had a very impressive first campaign to say the least. 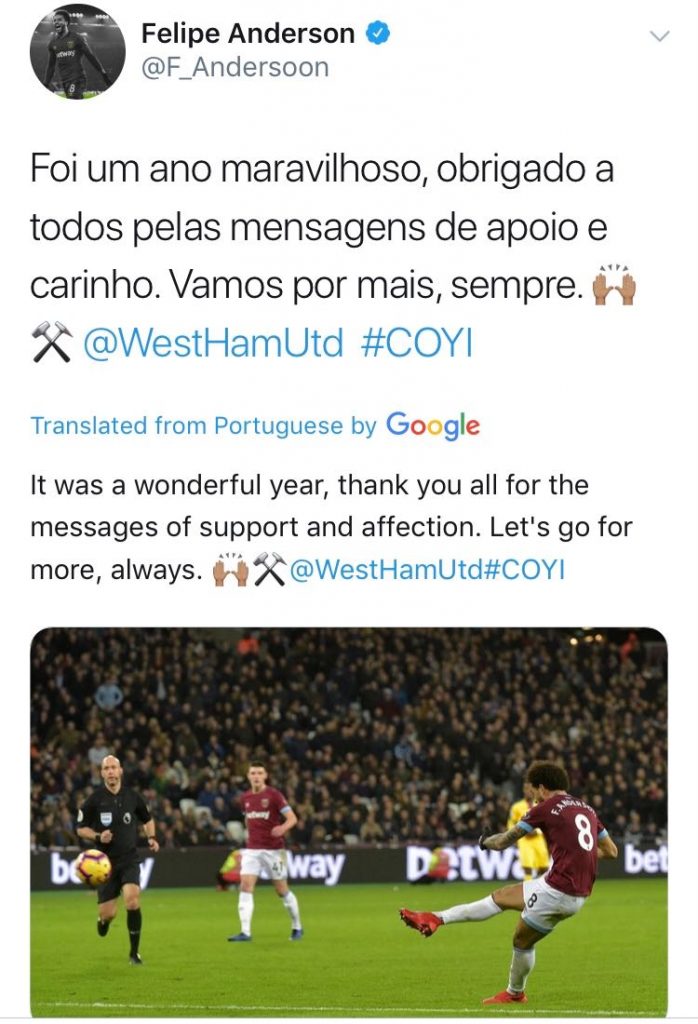 In a heartfelt tweet posted from his personal Twitter account, Anderson said: “It was a wonderful year, thank you all for the messages of support and affection. Let’s go for more, always. #COYI”

Felipe Anderson has been somewhat a revelation for West Ham this season, and has certainly impressed fans in his first year at the London Stadium. The Brazilian winger has registered nine goals and four assists in the Premier League this season, which isn’t a bad start for a player who is playing in England for the first time. Anderson will no doubt be one of the first names of the team sheet for Manuel Pellegrini again next season, having gone some way to paying off the big money price tag of last summer. Anderson has impressed in flashes and has linked up well with other players at the club, finding himself second in the Hammers top scorers list in all competitions on a total of ten goals.  The 26-year old has been a part of a Hammers side which have been playing a new, attractive brand of football for the majority of the season, and it will be important that Pellegrini manages to keep Anderson along with a whole host of other players too, if the club want to progress next season.