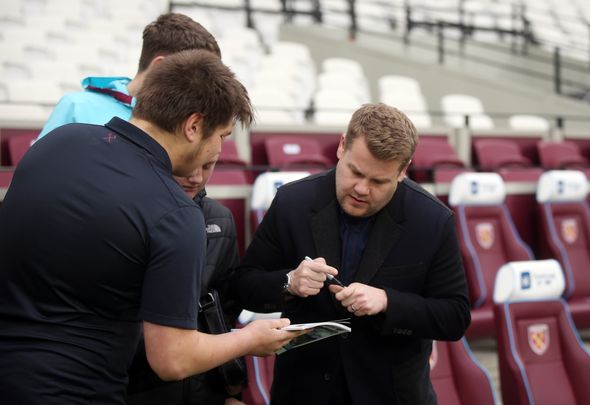 The newspaper claims that the Late Late Show host came across across the 30-year-old when he was walking through Mayfair in London with his fiancee Sarah Kohan.

The two men are said to have shared a warm embrace, before Corden – a diehard Hammers supporter- pleaded with the Mexican international to remain at the London Stadium.

Claret & Hugh reported in March that the former Manchester United man would be allowed to leave West Ham for £10million this summer.

Corden, as well know, is a huge follower of Manuel Pellegrini’s side. He’s been very vocal about his support for the team over the years, with his Gavin & Stacey character Smithy a famous West Ham follower. However, with the way Hernandez has performed during his time in east London, it’s a bit of a surprise that Corden is so keen for the Mexican to stay with the club. He’s not been a bad player, Hernandez, but he’s hardly pulled up any trees in a claret and blue shirt. Considering the money he’s on and his ever-advancing age, it would probably be a good idea to move him on this summer. However, Corden’s obviously not going to say that to him as he’s strolling past, is he? I’m sure this was a nice moment between the two men and both were presumably very cordial with one another. However, maybe Corden should re-think his stance on the striker.