Harvey Barnes put an abrupt end to what would have been a morale boosting win for the Hammers after Lucas Perez scored a rare goal to put them ahead at the London Stadium.

They will be looking to grab a positive result against Tottenham when they face them on their home turf this weekend, and in order to have the best possible chance of getting a result, Manuel Pellegrini must make two changes.

In goal, Lukasz Fabianski must start as normal.

The first change must come in the defence and in the shape of centre-half Fabian Balbuena, who made a woeful mistake that led to Jamie Vardy making it 1-1. The £40,000-a-week [Spotrac] defender must be axed in favour of Issa Diop, who has been on the bench recently.

Arthur Masuaku carried on his good form from the loss to Manchester United the other week with an excellent display against the Foxes. This should mean that Pellegrini will favour him over fellow left-back Aaron Cresswell once again on Saturday.

Michail Antonio impressed that day too, so it is a no-brainer to start him – Felipe Anderson, on the other hand, had a fairly quiet afternoon, but Pellegrini must keep the faith in him.

Marko Arnautovic was not at his best. He only had half-chances come his way, and he was not able to convert them. Javier Hernandez must be the player to replace him after being absent for the Leicester clash.

If Pellegrini makes the right calls regarding his starting XI, then there is every chance that his team can defy the odds against Spurs on Saturday. 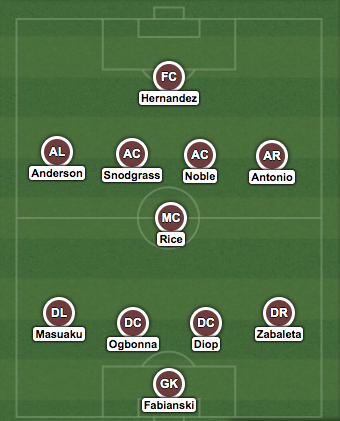