Manuel Pellegrini is predicted to make one change to his starting line-up ahead of West Ham’s Premier League clash with Tottenham on Saturday.

After missing West Ham’s last game, a 2-2 draw against Leicester City at the London Stadium last weekend, due to an ear problem Javier Hernandez is expected to be recalled to the starting line-up.

Senior player Robert Snodgrass could be axed from West Ham’s starting line-up to make room for Hernandez, in a move which could see Marko Arnautovic drop a little deeper and look to combine with the Mexican international.

Lucas Perez may also be considered to start after coming on and scoring against Leicester, but it is likely Perez will once again be used from the bench with Hernandez the preferred option. 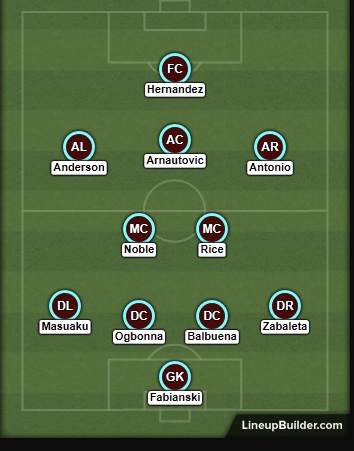 Michael Antonio also impressed in the draw against Leicester scoring the opening goal of the game, heading in a cross from Snodgrass for what was his 25th Premier League goal. The 29-year-old provided a constant threat down the right hand side with his physical stature causing problems for Leicester’s defence, he is predicted to line-up on the right hand side again against Tottenham and look to link up with Pablo Zabaleta down that side.

Mark Noble and Declan Rice are again expected to be paired with each other in central midfield, with the pair forming a strong partnership this season, although Pedro Obiang will be pushing for a place in the starting line-up after impressing off the bench against Leicester, though he is expected to be named on the bench again.

Fabian Balbuena and Angelo Ogbonna could face competition from Issa Diop for a place at the heart of West Ham’s defence, after the Hammers conceded twice against Leicester last weekend, though Pellegrini is expected to stick with the same centre back pairing.

Aaron Cresswell has returned to training after a recent injury, but is unlikely to displace Arthur Masuaku at left back, while Jack Wilshere is again expected to be named on the bench after coming on against Leicester last time out.