West Ham manager Manuel Pellegrini is expected to bring Robert Snodgrass back into the starting XI when his side take on Manchester United this weekend.

The Hammers are looking to bounce back after being beaten 2-0 by Chelsea on Monday night, defeat to the Blues leaving the east London outfit sitting 11th in the Premier League table.

With another clash against a top four chasing side, Pellegrini knows his side are up against it but is only likely to make as many as two changes to the line up, with Snodgrass joined by Issa Diop in returning to the side, Angelo Ogbonna and Javier Hernandez the international pair to drop out. 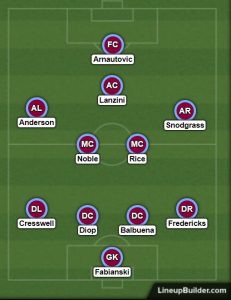 At the back, 22-year-old Diop is likely to be the only change, reforming his partnership with Fabian Balbuena at the heart of the defence. Aaron Cresswell and Ryan Fredericks have emerged as Pellegrini’s first choice on the flanks and so they can be expected to remain.

Mark Noble and Declan Rice are the preferred midfield pairing, while 26-cap Scotland international Snodgrass should join Felipe Anderson in covering the wings for the Hammers.

With Marko Arnautovic moving into his centre forward role once again as Mexican star Javier Hernandez drops out, Manuel Lanzini looks likely to play just behind the Austrian in a bid to try and snatch a surprise result from Old Trafford.