West Ham United chairmen David Gold and David Sullivan will reportedly make £30million available for summer transfers and it is a reveal that has not gone down well with the east London faithful. Football.London claim on their website that manager Manuel Pellegrini will not be given the same luxuries that allowed him to break West Ham’s transfer record twice last summer and will instead be forced to boost his coffers with player sales. The Chilean manager spent a figure in the region £89million in the previous summer window and West Ham fans were not happy with the news that broke. One fan cried out that the Hammers budget was ‘Championship money’. Other news that could make the fans a little bit happier is the fact that money made from player sales should be made available. That means the funds available could be higher than the reported £30million with players such as Carlos Sanchez rumoured to be made available after another season full of injuries. With rumoured targets such as Kerem Demirbay and Edin Dzeko, West Ham will definitely need more than the rumoured budget, with many fans agreeing they could need a lot more.

Forever West Ham has picked out some of the best tweets below: 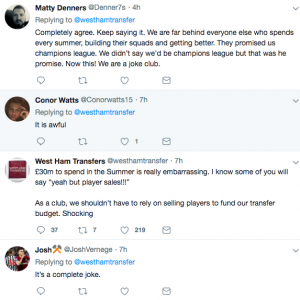 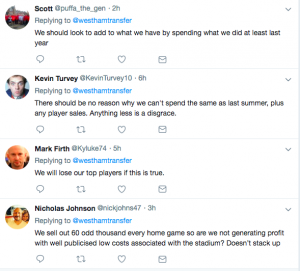