The Argentine has taken a back seat to Ryan Fredericks in recent weeks, but after the former Fulham man’s struggles against Cardiff City Zabaleta can expect to come back into the team here.

Arnautovic, too, has been somewhat frozen out of late. The Austrian international is yet to start since his January escapades, but Pellegrini is likely to bring him in from the cold after last week’s disaster in Wales.

Those will likely be the only two changes from the team that lost to Cardiff, with Fredericks and Javier Hernandez expected to miss out at the London Stadium.

Lukasz Fabianski has arguably been the Hammers’ best player this season and as such it is a near certainty that he lines up on Saturday. Aaron Cresswell, too, is expected to start at left back.

As mentioned, Zabaleta will likely come in for Fredericks on the right hand side of the defence. At centre back, Issa Diop and Angelo Ogbonna will surely keep their places for another week.

Robert Snodgrass and Felipe Anderson have been Pellegrini’s first choices on the wings in recent weeks and there’s nothing to suggest that that will change here. Meanwhile up front, as mentioned, Arnautovic could replace Mexico international Hernandez. 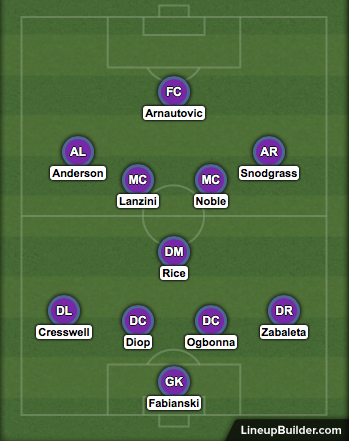