Barkley: West Ham’s Rice has been incredible in training 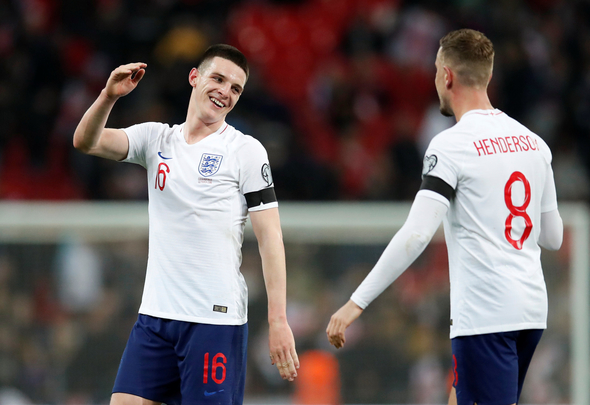 Chelsea and England star Ross Barkley named West Ham midfielder Declan Rice alongside fellow young England internationals Jadon Sancho and Callum Hudson-Odoi as a trio who have blown him away in training during the international break.

The Hammers enforcer was handed his first call up to the Three Lions’ senior squad after changing allegiances from the Republic of Ireland, joining Hudson-Odoi in making his debut for Gareth Southgate’s side in the two week break from league action.

Revealing the impact that this next generation of England stars have made, Barkley admitted they were absolutely outstanding behind the scenes as well as on the pitch.

He told the Express: “You see how the young players have performed and how good they are. Declan Rice, Jadon Sancho and Callum (Hudson-Odoi). All week they have been frightening in training and the future is bright.

Sancho and Hudson-Odoi are not a bad duo to be associated with considering their rise as youngsters and so Rice should, if he did not already, know the potential he has. It is exciting times not only for the Three Lions, who are lucky to have such prodigious talents at their disposal, but for their clubs too, who are no doubt drooling over the prospect of what they can bring to the fray for the foreseeable future. Rice has been somewhat fortunate to have picked up so much game time in east London, injuries to teammates bringing him front and centre for Manuel Pellegrini’s side early this season – somewhere he has never looked back from. Hudson-Odoi meanwhile has struggled to be a regular at Chelsea and he might have to look at following Sancho in moving overseas to get his break. The Blues’ loss will be someone else’s gain – which is why the Hammers are no doubt loving seeing Rice play so regularly this season.