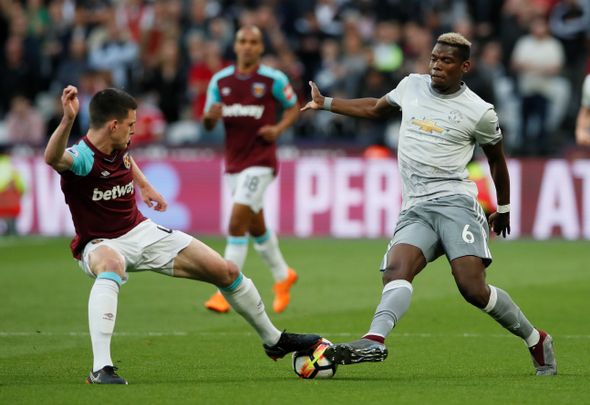 Stuart Pearce heaped praise on West Ham defender Declan Rice and was expecting to see him feature against AFC Wimbledon on Tuesday night.

The 56-year-old was asked by Sam Allardyce how good he thought Rice was and Pearce responded by sharing that he thought the centre-back had all the tools needed to succeed and was the type of player you’d want at your club.

Pearce went on to reveal that he keeps a close eye on Rice despite no longer working for West Ham and stated that he was now one of the players who had to fight for his place after not being involved in the Hammers’ last two games.

“He’s a fantastic kid to work with, wants to learn all the time, y’know obviously he played a couple of sensational games at the back end, made a few odd mistakes, but they all do when they’re young Sam.

“I think he wants to learn, he has the physically attributes to be a good player in this division, decent with the ball at his feet, y’know in the seven months we were there, we were asking him to play as a holding midfield player, a right-back at times and a centre-back at time.

“It was tough on him but I think he’s got the tools, he’s the sort you want to work with and have in at your club.

“He played the first game of the season, I keep a close eye on him, and then he’s not featured in the next two and we’re covering the AFC Wimbledon game tonight that West Ham are playing so I expect him to play in that game so it’ll be interesting to see him.

“He’s one of these that has got to fight for his place again to get back in the West Ham line-up.”

Rice who stands at 6ft tall (Source: Transfermarkt) certainly has a fan in the form of Pearce as it appears the former Hammers coach can’t stop saying nice things about him. It’s nice that the 56-year-old is keen to keep watching the defender develop as it shows how nice to work with he must have been. However Pearce is right to suggest that Rice has a battle on his hands to feature this season as competition for a place in Manuel Pellegrini’s starting line-ups is intense to say the least. The 19-year-old centre-back had a terrible time during the 4-0 defeat to Liverpool when he was deployed in midfield and his manager will be having second thoughts about playing him in that position again anytime soon. It seems harsh that Rice hasn’t been involved in the two games since as it was always going to be difficult for him to excel against the Reds as they’re a team packed with world class players who are raring to go. Hopefully Rice proves himself to Pellegrini shortly.