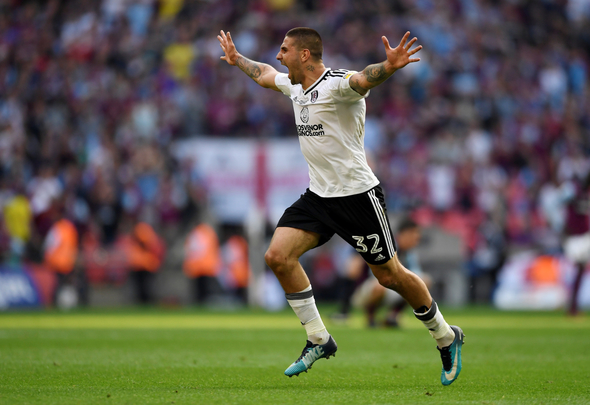 West Ham must look to beat Fulham to the signature of Newcastle United attacker Aleksandar Mitrovic as he would be a sensation at the London Stadium.

Throughout the transfer window so far the Cottagers have seemed very likely to get the 23-year-old forward from the Magpies as they have consistently been linked to him since he impressed for them on loan last season.

However given that Sky Sports reported on Tuesday that the two Premier League sides still hadn’t reached an agreement over a permanent deal for Mitrovic, then the Hammers should look to welcome Mitrovic to the club.

The broadcaster claimed that Fulham were only willing to pay £16million to get the powerhouse forward whereas the Magpies were looking to receive £18million for his services.

The Hammers have shown their willingness to splash the cash in this window and £18million is a respectable amount to pay for a 23-year-old attacker who was in prolific form by the time the 2017/18 season ended.

Mitrovic was scoring goals for fun once he joined Fulham on loan in January and finished the season having scored 12 goals in 20 appearances for the London club.

While there may be some that point out that he was being a lethal finisher in the Championship, Mitrovic does look capable of being a prolific force in the Premier League if in the hands of the right manager.

Manuel Pellegrini has plenty of experience in football and could unlock the 23-year-old’s potential in England’s top-flight if given the chance to work with him.

Mitrovic has all the attributes needed to excel in the Premier League as he’s physically tough, has an eye for goal and isn’t afraid to put his body on the line for the cause.

Following the injury to Andy Carroll earlier this month, as confirmed by the club’s  official site, Pellegrini could do with another talented forward to call upon.

This all means that the Hammers should match Mitrovic’s reported £18million price tag in order to beat their Premier League rivals Fulham to the player’s services.