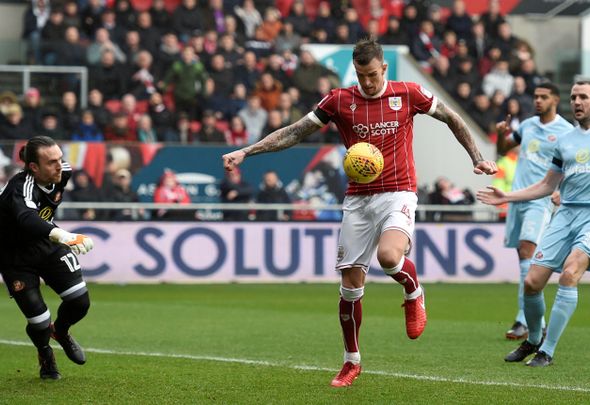 West Ham have enquired into the availability of Bristol City defender Aden Flint, according to Knees up Mother Brown.

The independent Hammers fans site shared that after Manuel Pellegrini’s team made contact regarding the 6ft 6in tall (Source: Sky Sports) centre-back they are likely to turn their attention elsewhere due to his price.

Knees up Mother Brown report that the Hammers were quoted a price of £9million by the Championship side if they wanted to pursue with their interest.

Flint is a wild card option to take when addressing the club’s defensive frailties.

The 28-year-old enforcer has successfully showcased his abilities in his recent campaigns and looked like an important player for Bristol City in his 2017/18 campaign, even chipping in nine goals to help his side’s cause.

However given his age and lack of top-flight experience there are many better options £9million could buy you, so it makes sense that the Hammers are likely to turn elsewhere.

While Flint could do a solid job in the Premier League next season, he would still be an expensive gamble.

It seems the Hammers were simply checking out of a lot of options in their hunt for a new centre-back and won’t chase after Flint due to his surprising price tag.

Knees up Mother Brown claim that Premier League new boys Fulham are in hot pursuit of the giant defender so at this stage it seems more like that he’ll end up at Craven Cottage rather than the London Stadium this summer.

Although if all other deals regarding get a new centre-backs fall through, the Hammers could return and reluctantly pay out £9million for his services.