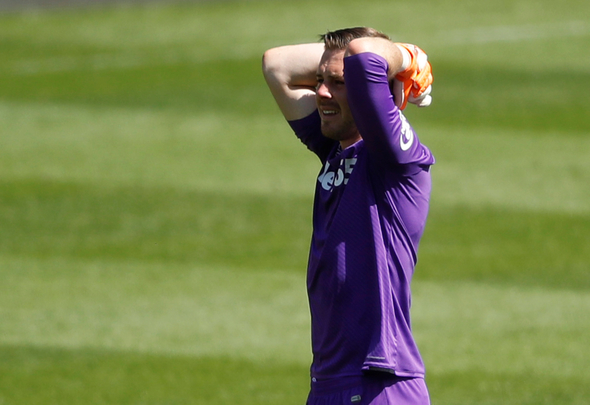 West Ham have made an approach to sign Stoke City goalkeeper Jack Butland, according to the Daily Mail.

The newspaper claim the Hammers have joined Wolves and Chelsea in the race to land the England international, who will contest the number one spot with Jordan Pickford at the World Cup this summer.

The Mail report that relegated Stoke will reluctantly sell Butland but will demand a British-record fee for a goalkeeper of more than the £30million Everton paid Sunderland for Pickford last summer.

Butland would represent an upgrade on the Hammers’ 2017-18 senior pair Adrian and Joe Hart. The England international is a proven Premier League performer, he has not yet entered his peak years and his wages are within range for West Ham (stats site Spotrac claim he earns £35,000-a-week), although his asking price is another matter. Butland is also certain to push for an exit following Stoke’s exit from the top flight, which came after a season in which he was one of their few standout players. A move to the London Stadium is certainly highly possible. Butland, who stands at 6ft 4in (source: Transfermarkt), has a wealth of Premier League experience as well as seven international caps and his reputation could rise if he makes the England starting XI in Russia and does well. West Ham are in need of a super-reliable number one and the Stoke man would fit the bill nicely, although they will need to spend big to get him.