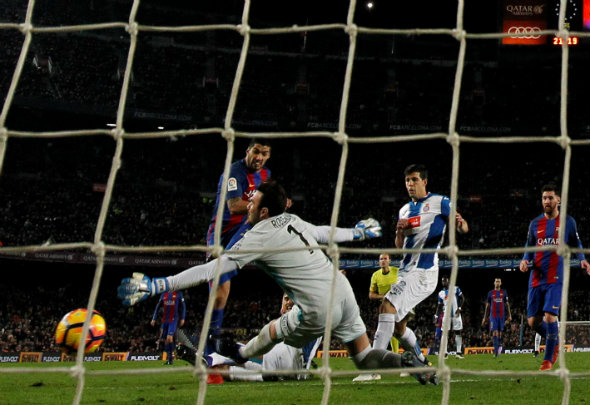 West Ham United are in the hunt for veteran Spanish goalkeeper Roberto Jimenez and have tabled an offer to the 32-year-old Espanyol stopper, according to AS.

The Spanish newspaper report that new director of football Mario Husillos, who worked with Pellegrini at Malaga, where Jimenez spent the season on loan, is keen to get the stopper to the London Stadium.

AS claim that the proposal given to Jimenez by the Hammers would see him earn around £42,000-a-week, which is a similar wage to which he is currently earning in southern Spain.

It is said that Espanyol are seeking a fee of just £1.75million.

It depends on the club’s plans for Jimenez next season.

If they plan to install the 32-year-old as their number one choice between the sticks, then no, this is not a good move. The veteran has done little to suggest he has what it takes to fulfil such a role.

If the club however plan to just use him as a back-up, then yes, this would be a good move. The low transfer fee and inevitable short-term contract will mean this is a risk-free move for the Hammers.

It is said that Husillos is keen on a deal to bring in Jimenez to the London Stadium following his appointment as director of football, and that could see this one come close.

Other positive signs are Espanyol’s obvious willingness to strike a deal, and the fact that the Hammers seem to have no problem in paying his current wages in La Liga.

All in all it is actually looking like this one could go through, but a lot may depend on Pellegrini’s plans for Adrian, who is thought to be wanted by boyhood club Real Betis.