Hidden gem must be unleashed upon West Ham first-team 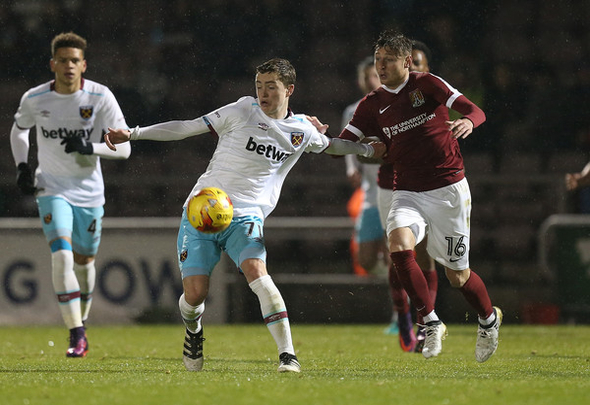 West Ham should go all out in their final two games of the season despite being safe from relegation, however David Moyes should still take a risk and play Alfie Lewis.

The Hammers have two matches left to play in the Premier League this season, against Manchester United and Everton, and will no doubt be keen to end the season on a high.

While Moyes’ side face a tough task against Man United in particular, there’s no reason to suggest that playing the same team that featured against Leicester City on Saturday will guarantee points.

Newcastle United have already shown in their last few games that a player’s form tends to drop once a team’s Premier League status is secured, and the Hammers will no doubt want to avoid that happening to them.

The Hammers defeated the Foxes 2-0 at the King Power Stadium on Saturday, with many players impressing, but there’s room for an exciting hidden gem to feature.

The hidden gem in question is none other than 18-year-old central midfielder Alfie Lewis.

The teenager has battled hard to be in good form in the Hammers’ youth set-up this campaign, after much of his 2017 campaign was blighted by a serious knee injury.

Lewis has featured for both the Hammers’ U-18s and U-23s team this season, a testament to his ability, and should be given a taste of Premier League football in at least one of the games that remain.

While some will question whether he is ready to feature for any amount of minutes that Moyes will afford him, supporters should think back to March’s friendly against Dagenham & Redbridge.

Several senior stars, such as Aaron Cresswell and Patrice Evra, failed to set the world alight in the 3-1 win over the National League, however Lewis took the game by storm.

The 18-year-old was an energetic presence in the Hammers’ usually tired midfield and his passing looked ready to carve open Premier League defences on that night.

Lewis was an enthusiastic figure, which is infectious, and would give fans at the London Stadium an indication of the bright future in store for them after what has been a disappointing season.

While it may ask too much of the teenager to start either Premier League fixture, he’s yet to make a senior appearance for the Hammers, it wouldn’t be the worse sight to see the hidden gem handed 20 minutes of action.

Therefore given his talents, the 18-year-old could get Hammers fans raving about his potential if Moyes is bold and hands the teen his first Premier League outing as soon as possible.