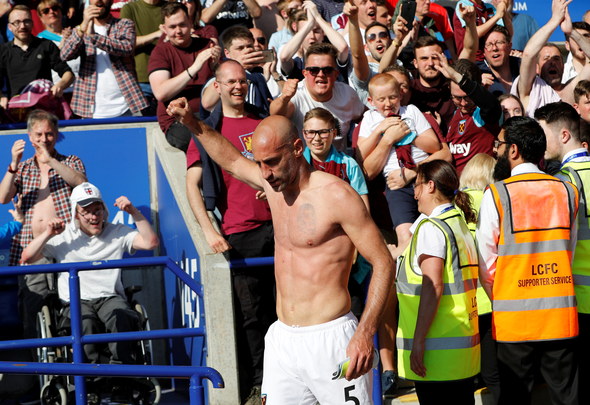 Garth Crooks boldly claimed that Mark Noble should have been named the Hammers’ Player of the Year by fans and was completely wrong to do so.

The BBC pundit made the claim after gushing about the 31-year-old midfielder following his performance against Leicester City on Saturday.

Noble scored a tremendous goal to help the Hammers defeat the Foxes 2-0 and deserved all the plaudits Crooks bestowed upon him.

However the pundit went too far when he claimed that the midfielder was robbed of the honour of being the club’s Player of the Year.

“How can West Ham fans name Marko Arnautovic their player of the season?” questioned Crooks when naming his Team of the Week for BBC Sports.

“Surely it has to be Mark Noble, in one of the most difficult seasons West Ham have had in the Premier League, it was Noble who assured the fans when they lost their heads that with their help all would be well.

“He has never shirked a game, a tackle or an interview, and against Leicester – when you needed a big man to match the occasion – it was ‘Mr West Ham’ who came to the rescue and won the points.

“There is only one player of the season for me at West Ham and that is Mark Noble.”

Arnautovic was rightly handed the personal accolade, after scoring 10 goals in 30 appearances this season, and Crooks’ suggestion of Noble was just absurd.

The 31-year-old has been lacklustre in the majority of the 31 games he has featured in during this campaign, with his ageing pair of legs keeping him from firing on all cylinders.

There were too many occasions where Noble’s lack of pace was exposed by the Hammers’ opponents and led to them suffering disappointing results.

However while Arnautovic was the right winner, Crooks would have been completely justified if he suggested Pablo Zabaleta should of got the award.

The 33-year-old proved that age was merely a number in his 37 outings this season, as at times, he was the only positive to be seen in a struggling Hammers side.

Zabaleta, despite being naturally a right-back, was also able to come to his side’s aid when chosen to play in the centre of midfield.

Aside from his versatility, the 33-year-old’s constant will to win the ball shone through and his passing was its usual classy self.

Therefore while Crooks was wrong to gush about Noble to the degree that he did, he simply opted to rave about the wrong pair of ageing legs at the London Stadium.