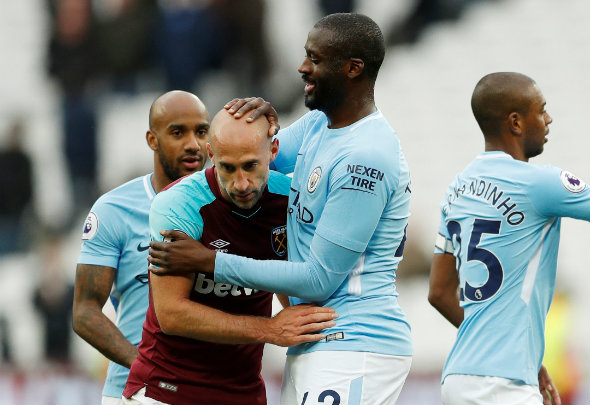 West Ham United have a massive summer ahead as they look to recover from a disappointing 2017/18 Premier League campaign, and the Hammers will need to target a different breed of player in the coming months if they want to avoid a similar campaign next time round.

The club need to bring in players with experience of playing at the highest level if they want to push on for a top-half finish next season, and there is one perfect star who will be available this summer.

As reported by the Mirror, there are several Premier League rivals interested in a move for Manchester City midfielder Yaya Toure, who is set to leave the club at the end of his contract this summer.

The newspaper claim that Everton, Burnley and newly-promoted Wolves are in the hunt for the 34-year-old destroyer, along with multiple clubs from abroad.

Toure has however made it clear that he wants to remain in England next season, saying: “Yes, because of my family. My kids, for me, are British. They go to school here, they have a lot of friends in Manchester. Manchester is their town.

“I would never celebrate a goal against City. I don’t want to face them, but if I want to stay in the Premier League, I’ll have to.”

This is an obvious indication that Toure will look to remain in the Premier League next season, and West Ham must take advantage of this and swoop for the veteran midfielder.

Toure would be the perfect addition to a flagging West Ham midfield, with his powerful play to add a new dimension alongside Mark Noble.

The Ivory Coast international has a passing ability that is unseen in the current Hammers squad, and his set-piece delivery is also unrivalled.

Most importantly, Toure is a winner, having secured endless trophies throughout his career, including three Premier League titles and the Champions League.

That is the kind of mentality that is needed at the London Stadium if the Hammers are to progress, and they must table a big offer to blow their rivals out the water and take Toure on a free transfer in the coming weeks.